Posted at h in News by

Korneli Kekelidze Georgian National Centre of Manuscripts in collaboration with the Louvain University (UCL), through the financial support from the Shota Rustaveli National Science Foundation is eager to announce the contest for the selection of the participants of the International Summer School for Georgian Studies “Georgian Manuscript”.

National Centre of Manuscripts has six years’ experience of successfully holding international schools. The status of the center, its authority and school theme attracted many applicants from different countries (Austria, UK, the USA, France, Belgium, Poland, and so on).

The International Summer School “Georgian Manuscript” is considered for foreign and Georgian researchers and students (MA, PhD) interested in Georgian history and culture, especially in Georgian script and manuscript heritage, and a general interest in medieval studies. The aims of the Kartvelological International Summer School “Georgian Manuscript” is to promote Georgian manuscripts as an important achievement of Georgian culture at an international level, to popularize the Kartvelological sciences, focusing on the multi-faceted, multi-national foundations of Georgian manuscript culture and to inspire and develop future international cooperation among the Centre and Summer school attendees.

The working program of the school includes five modules: 1. Georgian script; 2. Georgian Manuscript, 3. Georgian historic document, 4. Georgian printed book, and 5. National Center of Manuscript as a unique institution – vault of manuscripts and scientific research center. Within these modules, 23 lectures are planned, including – two field /itinerant lectures at the spaces related to the school theme (Epigraphic Foundation of the National Museum of Georgia, Bolnisi Sioni, Mtskheta, Ateni Sioni), three workshops, an interactive program and the exhibition.

The leading scientists of the Centre who have been studying the manuscripts, historical documents and archival materials for decades, will share the results and methodology of their researches with the participants of the school. The representatives of other institutions of Georgia (universities, Georgian National Museum) and foreign researchers will participate in school operation.

The logical continuation of the summer school is an international science conference “Georgian Manuscript” where Georgian and foreign participants and lecturers of the Summer School will make presentations of their statements. The conference will promote the summarization of the accumulated knowledge about Georgian and foreign manuscript heritage, to raise actual issues the different fields of the manuscript heritage and to set up the plans for future research perspectives. The science conference includes one plenary session and three sections according to the following directions:

The science fair “Georgian Manuscript” will be held on July 10-20, 2019, in National Centre of Manuscripts, Tbilisi. The working language of the school and the conference is English. Lectures and other activities will be held with the support of simultaneous translation. It is planned to print theses and to publish the electronic collection of the conference.

Participants’ costs covered by the National Centre of Manuscripts includes accommodation, food and travel within Georgia, however individuals must cover their own travel cost to and from Tbilisi.

If you are interested in participating, please fill out the attached application form no later than 10th of December, 2018 and send it to the National Centre of Manuscripts: summerschool@manuscript.ac.ge. Selected candidates will be notified by the 20th of December, 2018. 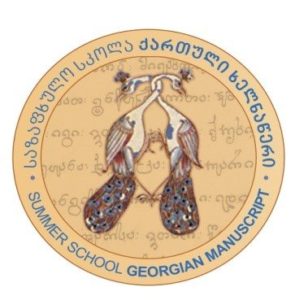