November 12th,  Assembly foyer  of Tbilisi municipality hosted a final gala night to celebrate the 60th anniversary of Korneli Kekelidze Georgian National Centre of Manuscripts. The guests of the evening include the Georgian government, Diplomatic corpus, Business Association of Georgia, Donor Organizations and others.

This incomparable ancient collection, first time ever, was presented via the 3D video-installation format. By the contemporary, conceptual vision, the viewer got information about Georgian identity and intellectual-cultural history. The exhibition promoted Georgian culture, its positioning in Europe and development of tourism potential. The concept and aesthetics of installation carried a worthy message to the World’s cultural space.

The event encompassed several book presentations, including the presentation of ‘The Knight in the Panther’s Skin’ so-called Begtabegiseuli manuscript published by ‘Bakmi’ publishing-house and of “Georgian Manuscripts” by authors collective. 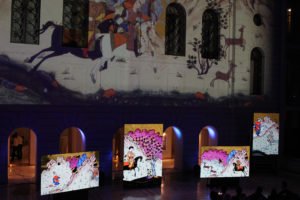